I’m writing, even though I don’t think they’ll deliver. The Old Souls Agency, they told me that I could write to you. Once. One phone call, one letter per subterranean. Ha! Makes a guy think about where to send it. The thing is, I don’t recall anyone ever getting a letter from here. I never did. Anyway, if this arrives, don’t tell Mom and Dad. It’ll freak them.

Beyond that, I wish I had more news. What’s it been? A month? You wouldn’t believe how little happens down here. OK, I’m sure you understand. Same as up there, right? For one thing, we can’t exactly move around. We communicate with thought migration. Worms own the dirt band. Farts filter like webmail. No spam. You know I’m not much with tech. We trade mostly local gossip. Who smells bad. Who got double-decked. Who’s new. We don’t know too many people out beyond.

And what’s to say? News is mostly “gophers ate my feet today” and “the roof of my shitty budget casket caved in and I’ve got a face full of dirt” kind of stuff.

Maybe the big news is, we don’t just hang around as we rot. Nope. Our dust sifts through the sands of time toward the center of gravity. Word from the old-timers is that it is truly hotter than hell down there. Or “hot as,” to be precise.

Anyway, I’m drifting south. So if you decided to dig me up to make sure I wasn’t buried alive, I might not be here. As if you have any doubt about my terminal state. You didn’t have to shoot me. I was gonna break up with her, like I told you, just about when you showed up with the .38.

Where did you hide that thing, anyway? I don’t hold grudges. I’m glad you didn’t face charges. Me and my “thing,” that was enough punishment.

That’s about it. You probably didn’t want to hear from me anyway. Kiss the kids for me. And if you happen to run into Veronica (not that you would, but it’s a small town), tell her I didn’t write because she’s not my wife, and you are, and I was going to break up with her but you beat me to it.

He lives in Oregon with his far more talented wife and their awesome dog. 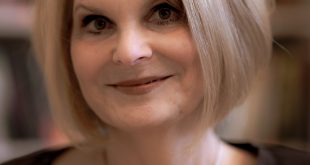 When the President Tweets by Ara Hone