“I’ll take one,” said Lazar, handing over the money. “And I’ll take one more every two weeks. You can get them for me?”

“There’s no shortage of feet on the market, señor. What will you do with this one?” He handed over a cold chunk of meat wrapped in a paper bag.

“That’s part of what I’m paying you for, not to ask questions.”

In truth, when the chef wasn’t looking, Lazar secretly ground the feet into meat for soup at the dining room of the Hotel Palacita, where he was the maître d. He got a thrill out of turning all those high-fliers, politicians, and movie stars into unwitting cannibals. After a few months, he was telling his purveyor to find fresher specimens than the graveyards of Mexico City.

The Hotel Palacita was a place where some stray conversation at the bar might seal you a life-altering deal. Desperate strivers on the make would try to get in for the sole purpose of mingling with the powerful and famous.

Lazar watched them. They all had their refined noses up each other’s assholes. The men would respect him only up to a distinct, crucial point, and the women treated him like a repellent dwarf, no matter how he flattered them. An admiring comment on their clothes or jewelry as Lazar led them to their table would earn him not even a nod or the ghost of a smile, but a complete absence of a human reaction, total dismissal.

Now he only fucked the girls on staff; waitresses, housekeepers, the girl at the front desk, and more recently, Clara. Clara was a new hire in the end of ‘36. She wore the same uniform as the other maids, but she carried herself with the easy elegance of a flapper. One day he went looking for her up on the third floor and found her drinking from a flask in one of the linen closets.

“I should turn you out into the street, drunken slut,” Lazar said, blocking the doorway to escape.

Clara shrank back. “Well, we’ll see. But not here. Is there someplace downstairs?”

“Yes. My office. Meet me there at midnight.”

She hesitated, and he said, “You wouldn’t want me to go to the head of housekeeping and tell her you were drinking on the job, would you?”

During that evening’s dinner rush, Lazar served his feet soup to select crowds of Mexico City’s glitterati. It was a tiring night. He was in his office smoking a cigar when Clara came in. She had changed out of her uniform for the night and was dressed in poor peasant clothes. In her floor length skirt, she looked like a flower struggling to escape the filth of the city.

“Come in and close the door,” Lazar said, putting down the cigar. She walked across the room, a little clumsy. Was she drunk already?

“See this?” Lazar pointed out a photo of himself next to a handsome young man. “You know who this is with his arm around me? That’s Diego Mictlan, the movie star. He was here at the Hotel tonight, with Lupe Vives. Know her?”

“I don’t really go to the movies much,” Clara said. She stood right next to him against the wall of photo trophies, swaying slightly.

“Can’t afford to go? Not on your wages, right?” Lazar said, looking down her flank. “You could make a lot more money coming to work for me.”

He reached out and did what he did with all the young women at the Hotel. He touched her. He slid his right hand up the curve of her hip, feeling the body tense and then relax under the skirt’s ruffles.

“I’d like being a movie star someday,” Clara said. “Even though I’ve never been.”

“Working for me you’d be closer to that,” Lazar said. “Those high rollers come here to dine. With a little luck, you could meet a producer. You’re certainly beautiful enough, and stranger things have happened. But first,” he seized her arm, sneering and, running out of patience, he said, “I’m going to have you for dessert.”

Lazar pushed Clara over to the chair behind the desk and made her sit down. He got down on his knees in front of her and began searching under the ruffles for her legs to spread them. Then he hiked the skirt up around her waist, and lowered his head to her crotch.

Her thighs clamped around his head, a little too rough for Lazar’s liking. He grunted. Then Clara maneuvered Lazar’s body and spun it, so his head was in her lap, looking up at the ceiling. In a wrestler’s move, Clara’s thighs became locked around Lazar’s head, her right calf was across his throat, and she reached down to take the prosthetic foot off the end of her right leg. It had been hidden away under the skirt, made of wood and iron, a shoe with a high heel on it. Clara brought the fake foot up and stabbed the spike heel into Lazar’s eyes, first one, then the other. Lazar screamed in shock and pain. Clara kept stabbing his now empty sockets with the prosthetic foot, deep into the brain, over and over.

The Hotel Palacita struggled to maintain their high food quality standards after their maître d’s sudden disappearance. The usuals pined for the old days of exquisite soups. But before long, the position was filled and a new starlet with a shiny new foot was dining there among the other movie stars. And even though Clara knew that Lazar was dead, she always made sure to ask about the ingredients in her food.

Jesse Hilson is a freelance newspaper reporter living in the Catskills in New York State. He has had or will have work published at AZURE, Maudlin House, Deracine Literary Magazine, the Daily Drunk, Pink Plastic House, Murderous Ink Press, and Close to the Bone. His crime novel WET UP will be published by Close to the Bone in April 2022. He can be found at both Twitter and Instagram at @Jesse Hilson 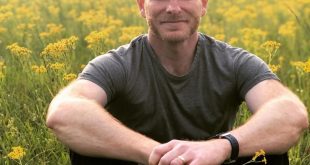