It all started at Humberto’s food truck on 13th street. The whole crew was there—Antoine, Tink, Shanks, and myself—enjoying the cheap cuisineat a picnic table beside the truck. Three of us were eating fish tacos, but big old Shanks was digging into a large bowl of Humberto’s chili con carne.

“Good thing we ain’t on a job,” Tink said nodding towards Shanks.

The three of us laughed and Shanks looked up annoyed.

“What the hell do you know?” Shanks asked through a mouthful of beans.

“Well, I know that whenever we’re in a car with you on a job, it ain’t a pleasant experience,” Tink chuckled. “Now I see why.”

We all laughed again, and Shanks glared.

“I’d like to see what the hell you got in your fridge at home,” Antoine said. “I’ll bet it’s a whole bunch of crap.”

“You don’t know what you’re talkin’ about,” Shanks said scooping his white plastic spoon into the bowl. “Ain’t nothin’ in my fridge worth lookin’ at.”

When he said that, I saw him squint and shift his eyes back and forth real quick. That was Shanks’ tell for when he was hiding something. And, I was sure I knew what it was that he was hiding.

“Okay, Shanks,” I said, “boost a car for tonight’s gig. Metropolitan’s a good bet. We’ll all meet back here at eight.”

When the crew split up, I hung back to make sure that Shanks was heading south down 13th towards the Metropolitan public parking garage. Then, I headed north on 13th to his cheap apartment up past Rollins. I used my special skills to let myself into his third-floor walk-up.

After locking the door behind me, I made my way through Shank’s dump to the small fridge in the kitchenette. Inside, there was rotting leftovers, old milk, lots of beer, but no swag. I swung the tiny freezer open. There in the fuzzy frost lay two Hungry-Man frozen dinner boxes with twenties and fifties spilling out of holes cut in the back ends. Thought so.

I heard a noise from the hallway and then a key sliding into the lock. I closed the fridge, dashed to the bathroom, stepped into the filthy tub, pulled the shower curtain closed, and slid the shotgun out of my side satchel.

Shanks entered the apartment and shuffled his way to the kitchen. The fridge door opened and after a moment I heard him say, “All right.” Shanks was just checking on his swag the way a dog checks on a buried bone. His footsteps headed towards the door.

Suddenly, a loud, vibrant, elephantine noise erupted as Shanks relieved himself of some serious gas.

I stifled a laugh and aimed the shotgun at the shower curtain.

I tried to control myself, but it was hard. I was shaking with pent-up juvenile hilarity.

Shanks ambled into the bathroom and paused. A prolonged sibilant whisper of back-end discharge came from the other side of the shower curtain. Seconds later, invisible tendrils of intestinal stink found me in much the same way that my granddad had been caught by mustard gas in a trench during the Great War. Wishing that I had thought to hold my breath, I pressed my back against the wall, held my head as high as I could, and blinked my smarting eyes.

“Okay then,” Shanks said and lifted the toilet cover with a bang. Then, there was the biggest blow-out of all. It was long and loud and exclamative and bold and unusually shrill.

I couldn’t help it. A laugh exploded out of my mouth.

“What the hell?” Shanks pulled the shower curtain aside with a quick motion.

I answered with both barrels. 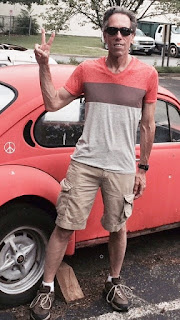 Michael A. Raithel is the author of five computer programming books, over 200 technical papers and programming blogs, and a book of computer humor: It Only Hurts When I Hit ENTER.

He works as a systems analyst in a research firm in the Washington, DC suburbs during the day and writes crime and science fiction stories at night.  Michael is a lifelong gym rat and an avid marathoner.

About Michael A. Raithel

Previous THE DMV by Zachary W. Clark
Next TAKE IT TO THE BANK by Curtis Ippolito