In the woods next to the 17thfairway, I found my father standing over Uncle Bob with a bloody wedge in his hands.

My father said, “This isn’t what it looks like.”

The 17th hole had begun normally: Uncle Bob had driven down the middle of the fairway, and my father had hooked into the woods. When Uncle Bob had followed my father into the trees to help him look for his ball, I heard Bob shout, “Just give up already!”

My father said, “I mean, I didn’t do it on purpose,” but he was holding the wedge like he was about to swing again.

I said, “Right, because you loved Bob so much, you would never do anything to hurt him.”

My father had always detested Bob, his older brother, the setter of standards my father could never live up to. The ultimate example: When Bob married Marjorie Holm, cheerleading captain, homecoming queen, etc., etc., my father soon got engaged to Dolores Holm, Marjorie’s younger, uglier sister, which seemed to be my father’s way of confirming to the world (as if there had ever been any doubt) that Bob had conquered the entirety of my father’s psyche.

Or so my mother had told me.

My father said, “I know we were never close,” which seemed a strange point to make while denying a murder.

I said, “You were close enough to hit him with your club.”

My father looked at the face of the wedge, and the blood seemed to surprise him.

He said, “I loved my brother.”

I said, “You want me to call an ambulance?”

“You made sure of that?”

My father was still looking at the blood on his wedge.

Now he looked at me.

I squatted next to my uncle and checked his pulse.

I said, “How many times did you hit him?”

“Once!” my father said too fast, like he’d been waiting for the question. “I found my ball, and Bob was too close, and I hit him with my backswing.”

“Why was Bob standing so close?”

“You must have swung mighty hard.”

“I wouldn’t have guessed you could swing that hard. Did you hit him with some practice swings too?”

“You were mad about losing to Bob? You always lose to Bob.”

My father trembled with anger. “Do you have any idea what it’s like to go through life losing at every goddamn thing you do—and losing to the same goddamn person every time?”

“Maybe you should have tried competing against somebody else.”

“Fuck you!” my father said. “Like I had any choice! You have no idea what it was like growing up after him.”

“No! No, you can’t. On my wedding night, Bob had a three-way with Marjorie and Dolores. Do you hear me? On my wedding night! Couldn’t he at least have waited till after we got back from our honeymoon? Why would a man do that to his brother?”

“She married me because I was as close as she could get to Bob. That’s the only reason any girl ever had anything to do with me. And once we were married, Bob fucked your mother as much as he could just because he could. The only thing that made him stop was this golf club.”

“Statistically, the odds are way in your favor. That’s what you were hoping for, right? I’ll bet that’s a big load off your mind. Right?”

“So, you just killed my father?”

“I just killed the biggest asshole in the world.”

I stared at the man who raised me. He was my father no matter what he said about the corpse on the ground.

“It was an accident, right?”

I looked at Bob’s unrecognizable face. “We need to hide the body. Would one of the water hazards be deep enough?”

Only then did I realize that my father had lost his mind. I had imagined a sudden flash of rage, but this was some other thing.

“Why do we have to take him home?” But I wasn’t sure I wanted to know the answer.

“Dolores and Marjorie have to see what I’ve done.”

“I don’t think that’s such a good idea.”

“But they have to see what a man I can be, right? I bet they’ll fuck me at the same time. Right?”

“I know, you think we need to hide the body, destroy the evidence. How about I take care of some evidence right now? How about this?”

My father licked the face of the golf club.

His face bloody, my father said, “Who wouldn’t want to fuck me now?” 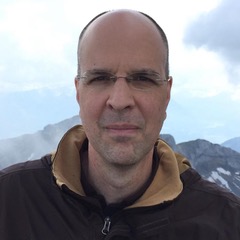 David Rachels has published crime fiction in a wide variety of journals and magazines. As well, he is the author of the poetry collection Verse Noir (Automat.Press), and he has edited three volumes of noir writer Gil Brewer’s short stories for Stark House Press.

Previous R/AMITHEASSHOLE POSTED BY TAMMY WHAMMY 2 HOURS AGO by Charlie Cancel
Next LOVE LIKE BLEEDING OUT WITH AN EMPTY GUN IN YOUR HAND by Stephen J. Golds