Evie knew this about the westernmost of the Great Lakes in winter. When the winds blew out of the north-northeast, Lake Superior’s ice surged up against the South Shore until it snapped with a crack like the opening of hell’s gate. The ice shoves, as newcomers to the region called them for centuries, shouldered ashore into an unstable ridge of mismatched blocks and shifting fissures that could swallow an adult of most any size. The ridge could well encircle the entire lake. Fragile sheets disappeared, swallowed beneath the advancing mass.

Cheshire Lane was closing. The COO could see the chain’s peak in the rearview mirror. Corporate restructured. The result? Seventy-five percent of its stores peppered throughout the ghost malls of the Midwest were closing. Stu got the call. He tapped Evie and the rest of the crew for the job.

He phoned her first. Evie knew he was repeating Avery’s line. Avery was their district coordinator. “Ahead of our work with Cheshire Lane, I think we’d do well to have a planning meeting. Say, a retreat. Make the project planning go down better, you understand?”

Of course. She wanted to ask if he was reading the notes he’d written from his meeting with Avery. But, no. Stu always had the words down cold. The tone and tenor, that was the issue. Drained through the sieve that was Stu, they always came off tentative. Although Stu did press to sound authoritative, that was true. Yes, he was thirty, thirty-one, but his crackly voice was still navigating its way through puberty, the sound of it frequently a hot wire of uncontrolled snaking, popping screeches. Evie rolled her eyes, hanging up. He was out of his depth. When the crew met for the planning meeting-cum-retreat, he would lack a cogent message or any semblance of a preliminary design. That would be Evie’s responsibility.

Their job was simple. When a retailer was set to close, the corporate office called them in. It was a fait accompli: the closeout sale. Everything Must GO! Big Savings! Through accounting wizardry, the crew made money, the corporation made money, and Jane and Joe Mid-America thought they were getting away with shopping murder. In fact, the retailer sat back when the crew moved in. The crew pushed up regular prices, listing sale prices higher than the original regular prices. Business, in the end, was good.

The Lake Superior retreat wasn’t necessary. But there was the beautiful lodge just east of Cornucopia. All expenses paid. There on the big lake, Stu told Evie, they would have an ice fishing derby. He’d rented deluxe ice fishing shacks. “You could weekend in them. Refrigerators, stoves, Wi-Fi, beds. Not cots, but beds.”

“One thing,” Stu asked, “Have you ever gone ice fishing before?”

She’d grown up in the north woods of Wisconsin. “Sure. I even have my dad’s old ice auger.”

There was the usual pre-meeting round of calls between Evie and the crew.

“Do you remember McAllister’s closeout?”

“You think he would’ve learned something after a year. What a clusterfuck.”

“We had to save ourselves—”

“Talk about a Stu in the headlights.”

“It wouldn’t have been so bad—”

“—if he’d just stayed the hell away.”

“Locked in his office.”

“If he would’ve just asked.”

“Afraid this one is going to go the same way.”

“The only thing that works with him is a slap down from Avery.”

“We could all make a trip to his office.”

The auger. The chasms that could swallow a man.

Evie took it as the crew’s blessing.

Stu was stumped by what he saw. What else is new, Evie thought. The ice shove hemmed in the Lake Superior shore like a miniature mountain range.

“How’re they going to get the shacks on the lake?” He wasn’t asking. “Avery is going to kill me. The cost.”

“Oh, he’s not going to kill you.” She rubbed his shoulder. “Listen. Before the rest of the crew gets here, we can climb over the ridge and check out the lake ice.”

“We don’t need those shacks. Come on.”

“Can we take your auger?”

She let him lead. Stu wouldn’t have had it any other way. The ridge looked solid to him.

He could have slipped, fallen back on the point of the auger she aimed at his spine, but, like his career, each stumble was forward. With his next to last lurch, he looked back and shrugged before soldiering on. That’s when he went headfirst, shocked into silence, down into an open fissure.

But not before he grabbed hold of Evie’s hand. 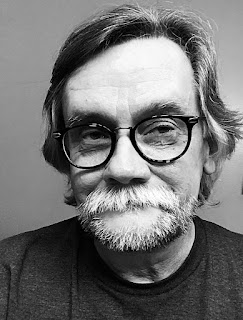 Jeff Esterholm’s work has appeared in Akashic Books’ Mondays Are Murder, Beat to a Pulp, Crime Factory, Mysterical-E, Mystery Tribune, Shotgun Honey, Tough, and Yellow Mama, as well as inMidwestern Gothic, Cheap Pop, Regarding Arts & Letters, Wisconsin People & Ideas, and Flash Fiction Italia. The Council for Wisconsin Writers and Wisconsin People & Ideas, formerly Wisconsin Academy Review, have recognized his work in years past. He, his wife, and their goldendoodle pup live in Wisconsin at the head of the Great Lakes.