Susie skidded to a stop for a fourth time, her rubber-soled flats smudging black streaks on the grocery store’s waxed linoleum floor. She darted left, caught a glimpse of him shuffling past the opposite end of the ice cream aisle. Her mouthed flopped open to suck more air. A bead of sweat trickled down her temple. The chirping of items being rung up from the wall of checkout registers behind her bleated out as it did all day, every day. Her flaring nostrils snorted stale air conditioning and lemon floor cleaner. When she got two aisles down to the coffee, the man doubled back, so she jerked to a stop, mirrored him.

She had no idea why she was putting so much effort into holding off this would-be bank robber until police could arrive. It’s not like she’d receive a reward or get to go home early. And no way her ten-fifty an hour would cover emergency surgery if she got shot. By then, if she survived, she’d have to use her vacation hours to make up the loss of pay. Yet, when her branch manager shouted her name and pointed at a guy wearing all black hovering at the bank entrance, Susie sprang into pursuit.

But who did she think she would be protecting? The thought crossed her mind as she knocked into and tipped over a basket display of Oreos featuring some new unholy filling. The bank’s money was insured. Their CEO would retain his seven-figure bonus even after resigning from the next #metoo or SEC scandal, just as the previous three had. Her manager would still earn a fat bonus at the end of the year based on the sales she and her fellow tellers secured through less-than-ethical lead-getting.

Maybe her sense of justice had kicked in, she thought. Running suicides with this guy like she was back on her high school basketball team because someone fitting his exact description had robbed her branch once before. Two months ago. Robbed a few branches in their district in the meantime as well. The alert bulletin described few details. Athletic build. Wore all black. Face masked. Nothing more than the blurry surveillance photo showed.

The man squeaked to a stop and took off in the opposite direction. Susie countered, her hairline dripping with sweat.

Maybe she wanted to be the hero. She’d never thought of herself as the type. But maybe she could help her teller line sleep soundly again, knowing the creep who passed an eerie note and mumbled about payback as they unloaded their cash drawers would be locked away, thanks to her.

Susie stopped. Lost sight of him. Or at least his blur. Panic chilled her skin. Goose skin ran up her arms. Then, the man’s head peeked around the far end cap of the frozen pizza aisle and her phone started buzzing in her back pocket. Her manager would read her the riot act if she found out she kept her phone on her person during work hours. Susie’s lip curled with the thought. She pulled out the phone.

“Frankie? Where are you? I thought you were off today.”

“Don’t mess with me, Frankie. This guy is trying to rob us again. I’m holding him off. Wait. What did you say?”

“I’m the guy, Susie. I robbed the branch last time. And those others.”

“What?!” she screamed. She clapped a hand over her mouth. Whipped her head around to make sure their manager wasn’t watching. “You? How? Why?”

Susie dropped the phone and pressed it to her chest. Her breathing labored. As she took several deep draws, she recalled how she and the other girls had given Frank shit for being off every time the bank robber hit their district. Uncanny, they used to joke. Real funny, she now thought. Finally, she caught her breath.

“Just let me run out. Before you say no, think how they treat you. I’m not the bad guy here.”

His words reverberated in her brain like a tuning fork.

She’d been passed over for promotions. Trained her superiors for their managerial jobs. Worked open to close and weekends. Then screwed out of the overtime. Threatened to be fired several times for not gathering enough leads to open fake accounts because she felt uneasy about the ethics involved, or lack thereof. To top it off, once someone blew the whistle, she only received $17.13 from the employee class-action lawsuit.

Before she could respond, before she could agree to his plan or reengage him in their game of cat and mouse, she caught Frankie in her periphery. His black blur streaking through produce and out the automatic glass doors. 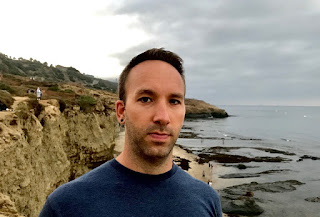 Curtis Ippolito is the author of BURYING THE NEWSPAPER MAN, a crime novel coming in March, 2021, from Red Dog Press. His short fiction has been published with Shotgun Honey, Mystery Tribune, Bristol Noir, Yellow Mama, Ghost Parachute, and forthcoming in others. He lives in San Diego, California.
Share

Previous A DEADLY WIND DOES THIS WAY PASS by Michael A. Raithel
Next THE ICE SHOVES by Jeff Esterholm