Eleanor’s screams echoed through the empty park. She knew that no one would hear them but her captors. They ignored her objections and bore her onwards, tiny fingers gripping her arms with preternatural strength. Inwardly, she cursed. She cursed herself for recognizing too late the menace that had infiltrated her life. She cursed herself for what it had done to her precious children. But most of all, she cursed that awful, ugly, overpriced, demonic toy.

The craze had swept the nation like a plague. Overnight, Huggy Hamster appeared in every toyshop window and on every advert on every children’s TV channel. Huggy was candy-scented and available in an array of neon and pastel shades. He had round, glowing eyes. Personally, Eleanor didn’t see the appeal. In fact, she found Huggy’s empty luminous eyes and bulging cheeks unsettling. But her five-year-old twins could talk of nothing else.

“Pleeeeeaaaase can we have Huggy Hamsters for our birthday?” said Annie over her breakfast of choccy stars and banana chunks.

“Yeah,” piped up Jack. “Pleaaaase. Tristan from karate club has one!”

“You’ll just have to wait and see,” said Eleanor. She knew from the playground chatter that it was almost impossible to get one’s hands on a Huggy. They had sold out the same day they appeared on the shelves, leading to public brawls and a vast underground market of Huggy Hamster knock-offs. One dad had even appeared on the news after being kicked in the crotch while wrestling a Huggy Hamster away from a grandma.

Eleanor didn’t relish the prospect of brawling over a toy, but her kids were persistent. They refused to go to bed on time (“I can’t sleep without Huggy!” complained Annie) and moped during meals. They screamed with excitement when Huggy appeared on TV, and Tristan even ran into the road when he saw a toddler carrying a Huggy Hamster on the pavement opposite. The twins had become hamster-obsessed terrors and, within a week, Eleanor broke.

She secured two Huggy Hamsters by joining the queue outside Toy Warehouse at 6am one Saturday. Behind her, someone yelled impatiently at the unfortunate teenager assigned to control the crowd. The girl nervously placated the mob of parents. “Please be patient. It’s just a toy, not the end of the world.”

How little they had known…

The twins were instantly inseparable from their Huggy Hamsters. They wouldn’t go to school without them. When Eleanor tried to prize them away at bath time they shrieked and ran, clutching the toys to their chests. Their video games, climbing frame and comics gathered dust. They would simply sit for hours at a time, staring into Huggy’s round, glowing eyes. They barely spoke to Eleanor. At dinner, they ignored her and mumbled unintelligibly to their Huggy dolls, which sat in their laps.

Eleanor shared her concerns with her friends over coffee. “They’re acting so strangely nowadays. Ever since those hamster things appeared.”

“You mean Huggy?” said Pauline. “Oh, Huggy’s miraculous. Mine have been so well-behaved since they got theirs. Always so quiet! I wouldn’t change a thing.”

That had been last week. Now, Annie and Tristan dragged her toward the playground, ignoring her protests. Their eyes were blank, staring and glowing. Gathered beneath the curly slide, a hundred other children with luminous eyes chanted under their breaths Huggy, Huggy, Huggy. Atop the slide squatted a gargantuan hamster. It was six feet tall with the same round, glowing eyes as its devotees. Its cheeks bulged. It was chewing something.

Eleanor pleaded with her children. “Annie, Jack… don’t do this. I’ll let you play with Huggy. I won’t ever take him away again. We can all just go home.”

The twins ignored her. With superhuman strength, they compelled her toward the waiting crowd. The mob urged her up the ladder of the curly slide to where Huggy waited. Eleanor fought to escape, but the children jabbed her with sharpened sticks until she was forced to climb. At the top of the ladder, Huggy Hamster towered over her. His bloated, pastel-coloured body smelled like candy and his great glowing eyes bored dizzyingly into hers. In the back of her mind, she knew that she should fight, escape, run, hide. But she could do nothing but return Huggy’s gaze. Calm overcame her and she didn’t scream as the fluffy creature unhinged its jaw to devour its next sacrifice.

CLICK HERE FOR AN AUDIO VERSION OF THIS STORY! 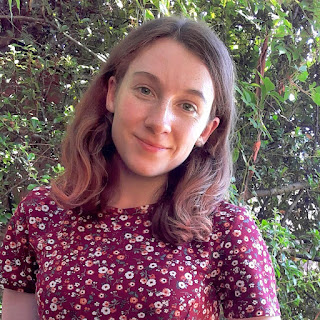 Abi Marie Palmer is an English teacher from the UK. In her spare moments, she writes short, spooky stories. You can find her flash fiction on instagram @lightningfiction.