Recently, my wedding to my fiancé Felix was cancelled, and I’ve been wondering if I should give back the ring. It’s an 18K White Gold Four-Prong Petite Comfort Fit Engagement Ring set with a 0.75 carat, round, D color, VS1 clarity, ideal cut diamond. I mean, it isn’t the ring that I dreamed about since I was a little girl. But it is nice, and, you know what, never mind, I’m going to keep it.

But that’s not why I’m asking if I’m an asshole though. Wait.

So, the night before the wedding, we were having a rehearsal dinner AFTER-PARTY!!!, bridesmaids and groomsmen, at this rented cabin a few miles from the wedding venue. Surrounded by beautiful trees, oh my god gorgeous, black as sin outside, bottles, bongs, and beer cans everywhere. Everyone was having a good time.

Then at some point during the night, Felix gets on my case and in my face because he’d just found out the bridesmaids dresses were peach, and Felix, like, HATES peach, strenuously hates it, and he says I knew that and why didn’t I tell him.

And I said, “That’s what you get for saying, ‘I’ll leave all the wedding shit up to you, Tam.”

Then he got all upset and walked away and fell asleep on the couch. Pot always does that to him. So, next time I see him it’s 3 a.m. and he’s stumbling out onto the deck and, let me just say, he doesn’t like what he sees.

I was like, “What? Do you know how much planning I’ve done? Do you know I’ve got family that flew all the way from across the country during this fucking pandemic?”

And he was like, “What are you doing with your tongue down Sean’s throat?”

And I was like, “We were just fooling around! Drunk! It was a party, am I right? Everyone was having a good time.”

I told him I still wanted to marry him. But he was adamant.

Anyway, that’s not why I’m asking if I’m an asshole.

So a week later he calls and says he ran into my ex, Anthony. Felix, who was seriously, seriously jealous of this guy, all of a sudden chats him up! And Anthony, oh Anthony, what a tool. In a good way and the worst way, I guess.

So Anthony ending up telling him that we had been engaged—I never told Felix that because he’s the weird jealous type. And then Anthony tells him he broke it off because he came home one day and caught me having sex with his brother. Which is true.

But it still made me livid. “What are you doing up in my business?” I told Felix. “That was five years ago. Ancient history. I was a kid then, 22. I’m a woman now.”

Then Felix is like, he wants the ring back, that if I don’t give it to him, he will take me to court to get it back.

I’m like, “Why don’t we just get married? I still want to marry you, even though you caused me all this trouble.”

Then he let loose with a string of the nastiest stuff you’ve ever heard. I’m serious, I was blushing, and I rarely, rarely blush.

No one but no one talks to me that way.

So I made a comment about his cock, which I know he’s always been sensitive about. Boom, right away he starts crying.

Then I told him I was would keep the ring in a box in the basement until one day I would just toss it out with the garbage.

But wait, that’s not why I’m asking if I’m an asshole.

So then I get covid. Like, a bad strain. I’m certain it was because I had to go to post office to return all the wedding gifts I didn’t want. I could feel the virus hanging in the air like a thick carpet. I had my mask on but there were so many people there not wearing masks and coughing and then this big guy bumps into me and my mask goes flying. I pick it up but I knew it was too late.

Well, a week later, it started. Sore throat, headache, diarrhea. Couldn’t taste shit. My father is a doctor, and he came over, said right away I had it, that I should come to the house and they would take care of me. I said I would go the next day, that I had some things to take care of first.

I still had the key to Felix’s place. He’s an idiot for not changing the locks. I went to his toothbrush first. Used it, didn’t rinse. Then I spit into his mouthwash. And then I sneezed into his pillow. A few times. I licked the handles of all his fancy knives. I found his workout clothes and wiped my sweaty armpits with them.

Seriously, nobody talks to me the way Felix did.

Anyway, it’s a month later, and I’m going to his funeral today. I mean, I’m feeling pretty bad, and my dad will have to bring me in a wheelchair. He says I pushed myself too far, ruined any chance of recovery. Yeah, I guess.

But here’s my question: I’m planning on wearing a peach dress. Felix hated the color peach. So, does that make me an asshole?

I would say no because you wore a mask to the post office. 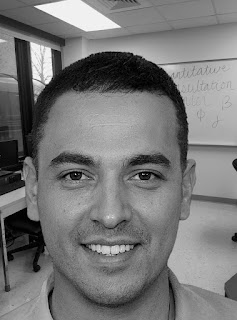 Charlie Cancél is a Jersey-born, half-Puerto Rican actor/writer/poet. He has had work published in Blunt, Sniplits, Huffington Post, and others. He lives in Queens with his family and is currently finishing a novel. Follow him on Twitter: @urbanurbane.